A Brief History of The Fox Foundation

The Riverside Fox Theater, now known as the Riverside Fox Performing Arts Center, is a historic landmark in the City of Riverside, California. It holds a significant place in our region’s history, and was named after its founder, William Fox, who lost control of his movie empire in the early 1930s, but whose legacy lives on through a long list of well-known Fox entertainment companies.

The Fox represents a long history of culture and community to Riverside. For decades, the Fox Riverside Theater was an integral local landmark in an area with a rich and thriving community, a booming citrus industry, and a region that carried the allure of being a luxury getaway from Los Angeles (or a lovely stop on the way to Palm Springs). Many stories mention celebrity giants of the old Hollywood era, such as Jimmy Stewart, Judy Garland, and Bing Crosby, visiting the Fox as guests! Many long‐time residents speak of initially courting their spouses at the Fox, or meeting their favorite movie stars, and others can tell what they learned about the world of cinema at the Fox.

The historic theater was shuttered for many years in the late 1990s, until its revitalization period, which spanned 2004 to 2010, when the City of Riverside purchased, renovated, and subsequently reopened the venue. As a municipally-owned theater, the Fox belongs to the community! It is managed by theater operator Live Nation under the branding Riverside Live, with great economic benefits to our region from a broad spectrum of shows and big ticket events. However, shows and events are not always affordable for the public.

In an effort to keep it accessible, on December 16, 2008 the City of Riverside sponsored the establishment of our independent 501(c)3 as a foundation to support our community. The Fox Riverside Theater Foundation exists to direct charitable and sponsorship funds to preserve this cultural resource and to provide quality programs for generations to come. As the philanthropic vehicle of the Fox Performing Arts Center, the Foundation independently raises all of its own funds through a team of grant giving institutions, donors, board members, and tireless program partners.

A History of The Fox Performing Arts Center

The Fox Performing Arts Center (the Fox) first opened its doors on January 11, 1929 as a cinema and vaudeville theater house. Back then, it was simply known as the “Riverside Theater.”

It was designed by Los Angeles-based architects Clifford Balch and engineer Floyd E. Stanberry, the team responsible for many of the 305 theaters in the “West Coast Theaters” chain, and was created in a Spanish Colonial Revival style that meshed beautifully with the 1920s’ aesthetic of the city of Riverside – but with a lavish art deco interior that was considered the height of luxury during that era, giving the venue an ornate, exotic atmosphere. The 1,550 capacity theater was built by Abe and Mike Gore, Adolph Ramish, and Sol Lesser, who constructed these neighborhood theaters for West Coast Theaters in the Southern California area throughout the 1920s.

In 1928, the West Coast Theaters group sold a controlling interest to William Fox of Fox Studios and the corporation became known as Fox West Coast Theaters, and thus the Fox Riverside Theater name was born. While this alliance with William Fox created a seamless production to distribution system for the film industry, the partnership with Fox was short-lived due to both antitrust regulations and Fox’s own financial difficulties. His corporation went into bankruptcy in the early 1930s and the theater subsequently came under control of the Skouras Brothers in 1932, becoming a part of the National Theaters chain, the largest and most successful theater chain in US history. But the name, and the brand, remained. 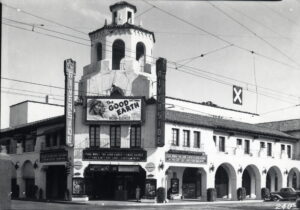 Despite the changes in ownership, from its opening in 1929 until the 1960s, the Fox Theater was used by the Hollywood-based film industry to show previews of future film releases before final editing. Riverside was considered a useful preview site because it represented, demographically, small town America. By previewing their future releases in Riverside, the film companies believed they could register reactions to their movie within the country’s largest viewing demographic, without having to travel too far from the home office.

The Riverside Theater’s opening movie, shown on June 11, 1929, was White Shadows in the South Seas, starring Monte Blue and Raquel Torres. Blue, a film star of that era, appeared in person to meet and greet those in attendance, and discuss the film.

About a decade later, On September 9, 1939, the Fox made its mark in Hollywood history when it held the very first public screening of the classic movie, Gone With the Wind. As the story goes:

On September 9, 1939, Selznick, his wife, Irene, investor John “Jock” Whitney and film editor Hal Kern drove out to Riverside, California to preview it at the Fox Theatre. The film was still a rough cut at this stage, missing completed titles and lacking special optical effects. It ran for four hours and twenty-five minutes, but would later be cut down to under four hours for its proper release. A double bill of Hawaiian Nights and Beau Geste was playing, and after the first feature it was announced that the theater would be screening a preview; the audience were informed they could leave but would not be readmitted once the film had begun, nor would phone calls be allowed once the theater had been sealed. When the title appeared on the screen the audience cheered, and after it had finished it received a standing ovation. In his biography of Selznick, David Thomson wrote that the audience’s response before the film had even started “was the greatest moment of [Selznick’s] life, the greatest victory and redemption of all his failings”, with Selznick describing the preview cards as “probably the most amazing any picture has ever had.” When Selznick was asked by the press in early September how he felt about the film, he said: “At noon I think it’s divine, at midnight I think it’s lousy. Sometimes I think it’s the greatest picture ever made. But if it’s only a great picture, I’ll still be satisfied.”

During World War II, the building served as a makeshift dormitory, after the soldiers from the nearby military bases filled the region’s available sleeping spaces.

Manager Roy Hunt allowed the soldiers to sleep on the thick carpets of the lobby and auditorium.

In 1942, the Fox Theater converted its stage and surrounding dressing rooms into a 536-person secondary theater named the “Lido,” which served as a “second-run” film house for headline pictures. Alterations and additions to the original design included the small secondary theater in the former stage house, alterations to the proscenium and various new sound absorption finishes in the auditorium. After World War II, changing demographics and fading fortunes of the surrounding neighborhood combined to decrease the viability of the Fox Theater.

After a long series of owners and operators, and years of deterioration and decline, the Fox Theater was eventually shuttered for many years in the late 1990s.

During this period, the City of Riverside purchased, renovated, and subsequently reopened the venue, in order to create a performing arts facility in the downtown area for community use. This beautiful state-of-the-art performing arts center was rebranded as the Fox Performing Arts Center, with a spectacular grand reopening on January 15th, 2010, and opening nights on January 22 & 23rd, with a 1,000+ gala crowd and Grammy-award winning headliner Sheryl Crow.

Today the City of Riverside continues to maintain ownership of this beautiful venue, and Live Nation provides a spectacular level of support as the manager/operator of both the Fox Performing Arts Center and an industry partner to the Fox Riverside Theater Foundation.